London Congress 2019 update
The Swiss Pairs event is now full.
There are still places in the Swiss Teams.
Seniors Pairs Sun 31 Mar was cancelled
The Seniors Pairs did not take place this year.
There were too few entries for there to be a viable event. 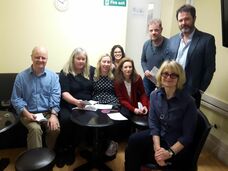 Garden Cities Heat 21 Mar 2019
Winners Young Chelsea Bridge Club represented by (L to R)
Peter Taylor, Margaret Nygren, Paula Leslie, Fiona Hutchinson,
Susanna Gross, Martin Nygren, Janrt DeBotton, Thor Erik Hoftaniska
Full Results
Lederer Memorial Trophy
​This year's Lederer Memorial Trophy, run by the London Metropolitan Bridge association, takes place this weekend, at the RAC in Pall Mall. Ten top-flight teams are invited to take part, and amongst those coming from far and wide are (in alphabetical order) Peter Bertheau; Dennis Bilde; Boye Brogeland; David Gold; Gunnar Hallberg; John Holland; Krzysztof Kotorowicz; Cedric Lorenzini; Andrew Robson and last - but by no means least - Zia, plus too many world class players to mention.
Play starts at 12 noon on Saturday, 11 am on Sunday. There will be BBO coverage throughout. If you're planning to drop by and watch in person, please observe the RAC weekend dress code.
Spring 2019 MetroBridge Newsletter
​The Spring 2019 issue of MetroBridge News is now available for viewing on this website . Just click here.
​The paper copies of the newsletter have been dispatched.​
Ian Gardiner Trophy Qualifier 10 Feb 2019
1 98.5 Vps Richard Creamer, Trevor Mathews, John Pemberton, Steve Popham
2 97.0 Vps David Gold, Susanna Gross, Paula Leslie, Richard Hillman
3 89.0 Vps Tom Townsend, Bernard Teltscher, Ben Handley-Pritchard, Alex Hydes, Mark Teltscher
The play-off for the Ian Gardiner Trophy will be between the two highest placed teams which have all players who are 'Primary Allegiance London', and they are teams Creamer and Townsend. Note this is a change from the originally published results due to a scoring error. All involved teams have been informed.
Full Results 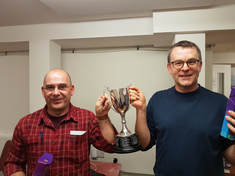 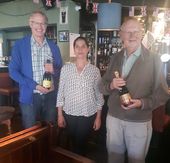 Café  Bridge Brook Green -18 Sep 2018
Winners Tony Verran & Peter Scotting pictured with Laura Cleeson
from the Honeypot Children's Charity - Results
Autumn 2018 MetroBridge Newsletter
​The Autumn 2018 issue of MetroBridge News is now available for viewing on this website . Just click here.
​The paper copies of the newsletter have been dispatched.​
Martin Hoffman 1929-2018
The LMBA is sad to learn of the death of Martin Hoffman. Martin was a hugely popular player, and was considered for a time to be the best pairs player in the world. He enjoyed a long string of successes, both in the UK and abroad, spanning half a century. He played 11 times in the Lederer Memorial Trophy. More about Martin on the EBU Website. 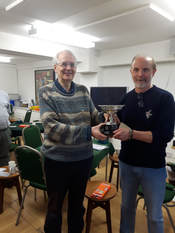 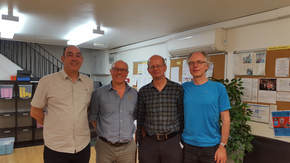 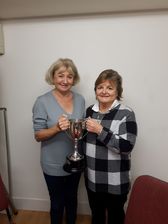 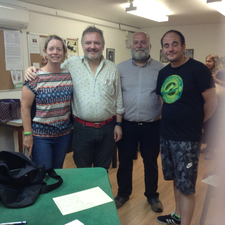 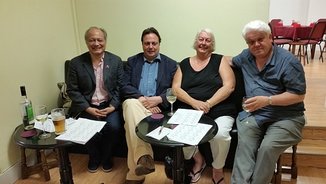 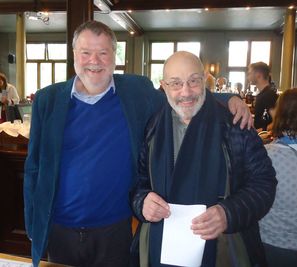 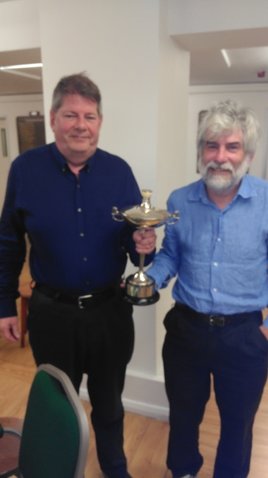 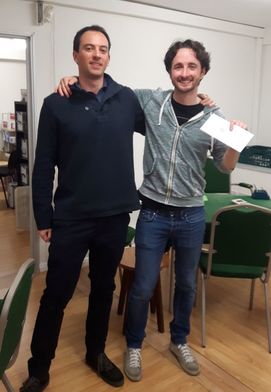 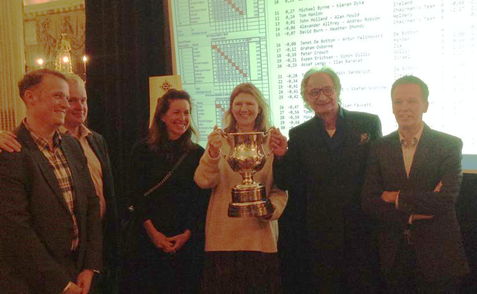 London Congress Sat 15/Sun 16 Jul 2017 - Important Information
Due to a clash of dates, we are not able to return to the Central Hall Westminster this year. The capacity of the YCBC is limited, so whilst we expect to be able to accommodate demand on Sunday, we may have to close the entry to the Pairs on Saturday. Players are advised to enter as soon as possible for both days, as entries for both will be accepted on a strictly first-come first-served basis. The entry brochure can be viewed and downloaded here.
Spring 2017 MetroBridge Newsletter
The Spring 2017 issue of MetroBridge News is now available for viewing on this website. Just click here.
The paper copies of the newsletter have been dispatched.
Ian Gardiner Trophy Qualifier 5 Feb 2017
1. 114 Vps Chris Duckworth, Brian Callaghan, Ian Payn, Frank To
2. 96.5 Vps Richard Creamer, Trevor Mathews, John Pemberton, Steve Popham
Both these teams have all members 'Primary Allegiance London' and so both have qualified for the play-off for the Ian Gardiner Trophy.
Full Results
AGM 2016 Draft minutes
The draft minutes of the 2016 AGM can be viewed here.
Sheila Peers
Long time member Sheila Peers has died. Click​ ​here for an obituary.
​Palmer Bayer Trophy 15 Jan 2017​
​The winners were Chris Townsend and Sam Oestreicher.
Full Results 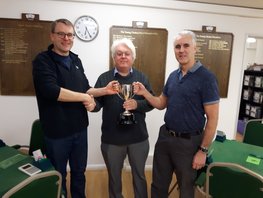 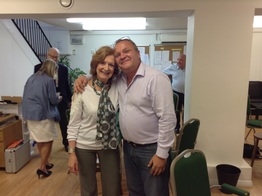 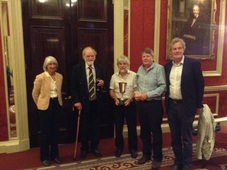 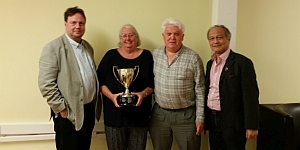 Winners (L to R) Ian Payn, Chris Duckworth, Brian Callaghan, Frank To
beat Tim Gauld, Paul Martin, Stephen Popham, John Pemberton by 14 IMPS over 48 boards.
The winning team are unavailable to play in the Pachabo, so the runners-up will be London's representatives in that event. 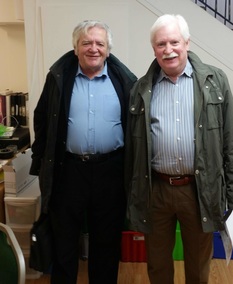 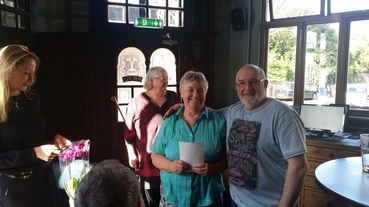 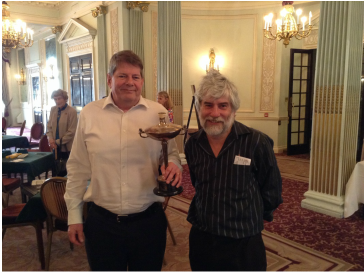 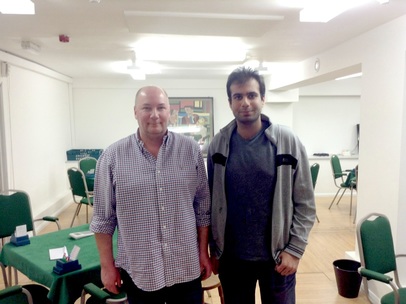 Garden Cities Heat - Thu 7 Apr
Winners - Young Chelsea Purple - Chris Duckworth,  Brian Callaghan, Will Roper, Niall Igoe, Margaret Nygren, Martin Nygren, Kath Stynes, Debbie Sandford. They will have the honour of representing London in the South-East Garden Cities Regional Final at Richmond Bridge Club on Sat May 7
A score that was incorrectly entered into the Bridgemate was drawn to our attention after the event,  it has now been corrected. This has changed the final order of the  teams, second and third swapping  places, fourth and fifth swapping  places. The revised scores are now posted (click on Results).
Results

LMBA apologises for the delay in the result of this event being uploaded correctly on this website.
The difficulty has arisen because the Teamscorer program used on the night seems reluctunt to display the results as a teams-of-eight rather than two separate
teams-of-four! Please note that the positions that were shown on Friday on this website were incorrect, as they reflected the scores only of half of each team. The
correct order is as now shown. Thank you for your patience with this!
Lederer Memorial Trophy
Results, teams, news, pictures from the event can be found on the blog
Silver at EBL Winter Games
Congratulations to London members Phillip King, Gunnar Hallberg and Andrew Black, who along with
Andrew McIntosh, Willie Whittaker and Swede Peter Berthau won the Silver medal at the 1st European Winter Games .
﻿Link to EBU report here.﻿
London win the Tollemache
Congratulation to the London Team on winning the Tollemache, after a brief fallow period.
London  was represented by (pictured  below, left to right) Frank To, Willie Coyle, Graham Orsmond, Rob Cliffe,
Kieran Dyke, Tom Townsend (with trophy), Mike Bell,  Stelio Di Bello, Phillip King and Nick Sandqvist (not in picture) 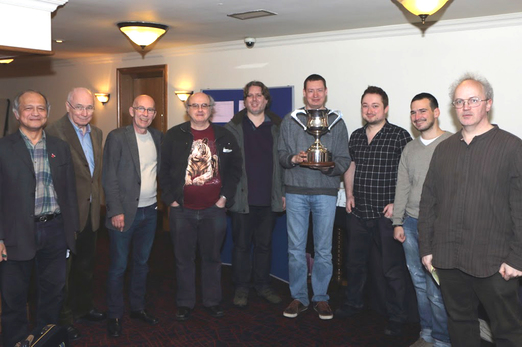 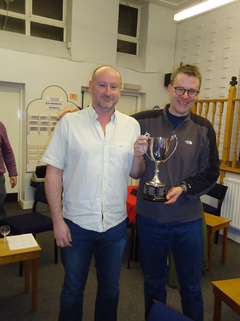 New LMBA Bridge Clubs
The LMBA would like to extend a warm welcome to the New Chiswick Bridge Club, the West London Gay Bridge Club, 10 CC Bridge Club and The Royal Automobile Club, (Pall Mall). They have recently affiliated their Club to the EBU and chosen London as their County of allegiance.
Well done! We look forward to seeing your members at some of our County events.

Welcome to all our New Members
Following the EBU's introduction of Universal Membership in April 2010, our Secretary and Newsletter Editor, Chris Duckworth, published a special edition of MetroNews for all our new members of LMBA Affiliated Clubs. Read on (Link TBA).

Why not send us a hand, your news or constructive comments?
You can email them to the webmaster, David Muller at d1muller@yahoo.co.uk